In our previous blog, we mentioned the scenic locations of the Northern Thailand. It is geographically a hilly area and boasts of many National Parks. We selected four locations which are popularly used as a background in many local and international productions. Few of the movies shot around the area have also been mentioned.

We selected few of the locations that would interest any location scouts.

Umphang Wildlife Sanctuary: If you are looking for thick jungles with rushing streams, this UNESCO World Heritage site would be the most ideal. Umphang Wildlife Sanctuary is linked with the Thung Yai Naresuan, Huay Kha Kaeng Reserves, Khlong Lan and Mae Wong national Parks. Together these form South East Asia’s top virgin forest. It also boasts of the country’s largest waterfall, Namtok Thi So Lu.

Sukhothai Historical Park: Fans of the Mortal Kombat movie series can easily recognized this location. It is the ruins of old Sukhothai, the capital of Sukhothai Kingdom which flourished in the 13th and 14th centuries. It served as a location for the popular Mortal Kombat: Annihilation (1997). Interesting Fact: famous Thai actor and martial arts expert Tony Jaa worked as a stunt double in the movie. 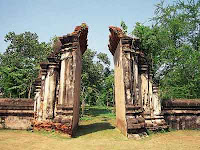 Utthayan Mueang Kao Pichit: A famous historical remains of an ancient town dating back to more than 900 years. There are scores of chedis scattered around the site. This location served as a backdrop for song sequences in many Bollywood productions and is also very popular for the local productions.

Phu Hin Rong Kla National Park: A beautiful location with a tragic history, this national park is popular for its vast plain of rocky formations. Its uniqueness makes it ideal for productions that would look for deserted and exotic locations, possibly double up for other planets!

Thung Salaeng Luang National Park: This location can easily double up for Savannah any day. It is vast grassland against a backdrop of high mountains, endowed naturally with pine trees and wild flowers.

In the next series, we will cover the Eastern and North Eastern Thailand.

Thailand is increasingly becoming a popular destination for the productions from all over the world. In one of our last blog, we covered reasons for shooting in Thailand despite the lack of incentives. In this new series of blogs, we cover locations from each part of the country.  Many might already know of the locations we will cover. A few we believe are unknown to many of the international location scouts. The series will show that there is more to the country than the notorious nightlife and the beautiful beaches.

Below are few of the locations

Doi Inthanon National Park: Imagine for a moment. A beautiful location populated by beautiful waterfalls. All around you can see the source of the rivers. And this location is located at the highest point of the country, at 2,599 meters to be exact. This is Thailand’s most well known national park and one whose beauty make your work more than enjoyable.


Doi Mae Salong: The area’s plantation doubled for many local and international productions notably American Gangster (2007), Ridley Scott’s helmed project starring DenzelWashington and Russell Crowe. It is however a beautiful tea, coffee and fruit plantations and not drugs as depicted. It has also been featured in many productions for romantic backgrounds.

Wat Chedi Luang: This particular location is very popular for local productions for many reasons. The main reason is its location among the beautiful hills. The second is the long staircase with what is believed to be the most beautiful man made methodological serpents rambling from the entrance of the chapel to the door, on both sides of the staircase. For a shoot that covers exotic Thai temple not flanked by the usual skyscrapers of Bangkok, this is total ideal.

Doi Phu Kha National Park: If you have watched a little known movie titled “The Elephant King”, this location’s beauty will not be of a surprise to you. The pink flowers are in here in this park, Chomphu Phu Kha to be exact. They are in full bloom during February. This location has been a favorite for both local and international productions alike. Permits can be applied for and accommodation services inside the park are available.

In the next series, we will move downward to cover the beautiful locations in the north western.
2 comments: