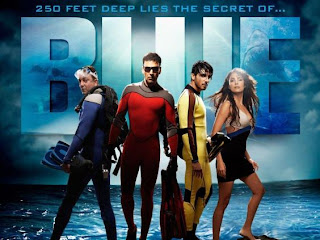 The crew from Benetone Films that worked on the smash hit BLUE (read about BLUE here) , which opened last weekend to great reviews, was treated to a private screening of the film last night at Paragon Cineplex. The audience was thrilled by the action sequences and there were even some cheers and applause from individual crew members when the bigger stunts they'd worked on played out on the screen. It was a great night with a great movie and proud moment for Benetone Films.
No comments:

Cinema Masters and Young Talent to Showcase Work in Bangkok

More than 80 international films will be screened at the 7th World Film Festival of Bangkok this year, featuring works from the European Union, Latin America, Asia and Southeast Asia. The festival aims to bring together the new and the old, the masters and apprentices, the classic and neo-experimental, and display the importance of continuity and development between the generations.

The festival is more than just film screenings, though - there are film-related talks like the Master Class Workshop, and other special events on the card as well. Probably the most unique and engaging aspect is a workshop, in co-operation with the Tri Continental Film Festival and Produire Au Sud from France, to guide film producers seeking funds for their new projects. At the end of the workshop, the most interesting film projects in Southeast Asia will be selected to receive funds and the makers will be invited to the final selection in France. COOL!

The movies will screen at Paragon Cineplex from November 6-15 and the schedule of screenings should be out soon. Keep up with all the latest news and info on the festival at the official website and go see some movies!
No comments: 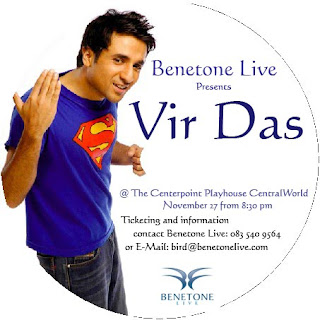 We told you it would happen and we're excited to bring it to you now. Benetone Live is kicking off a new event series dubbed Friday Night Live that will showcase various forms of live entertainment events featuring professional talent from both Thailand and abroad. The series aims to bring fresh entertainment choices to the hip and cultured circles of Bangkok (that means YOU!).
The series will premier with a special one night performance by internationally acclaimed stand-up comedian Vir Das on November 27 from 8:30 PM at the CenterPoint Playhouse in CentralWorld.

Vir Das is a young Indian comedian who has been seen in movies (Delhi Belly, Love Aaj Kal, Mumbai Salsa ), TV (News On The Loose: CNBC, Mumbai Calling), and as a top stand-up comedian performing before sellout crowds in major cities around the world. He receives praise and honors everywhere he goes tackling controversial issues and portraying complex human behavior with witty actions and one-liners. The Indian Express has lauded him saying, “Truly nothing escapes this comedic genius. Vir Das is a comedian to watch…”
He's hilarious, clever, and times downright raunchy (you're going to have to leave the kiddies at home for this one.) This is a rare opportunity and you're going to love this show. Don't miss it!
Tickets are now available to see Friday Night Live with Vir Das for 800 and 500 baht. For ticketing and further information contact (Bird) Keswarang Nantasriwiseskul at 083 540 9564 or 02 253 0124 OR email for info: bird@benetonelive.com.

The story begins in India, in the deserts of Rajasthan, in the temple of Shiva. Ayesha Merchant is the granddaughter of Shantilal Merchant, who choreographed dances during Bollywood cinema's golden era. The Merchant family's tradition of performing Indian classical dance, with all its precise hand, foot and eye movements, is passed on to the young Ayesha, but she is more interested in the modern dance and music of new Bollywood...

Thus the stage is set for the internationally acclaimed dance musical, The Merchants of Bollywood. Making its way to Bangkok October 22-26 at Royal Paragon Hall, Siam Paragon, the show has already performed in the United Kingdom, Spain, Italy, Germany, Switzerland, South Africa, the US and Australia on its five-year international tour.

Written by award-winning director Toby Gough and produced by Mark Brady, the Australian Mumbai collaboration is a theatrical spectacle like any true Bollywood film. “Their energy is electrifying, their movements suffused with a rush of joy and yet ruthlessly precise, and the frenetic flow of onstage activity is almost non-stop,” a Times of London commentary observed. “It’s a high octane pleasure to warm up the coldest winter night.”

Here's what some Bollywood stars have to say about it:

Tickets are available through Thai Ticketmajor and we recommend you don't miss out on this spectacular show!
No comments:

Here are some behind the scenes pics from the Standard Chartered TVC. Take note of the
recreated business-class seats and beautiful Bangkok scenery. 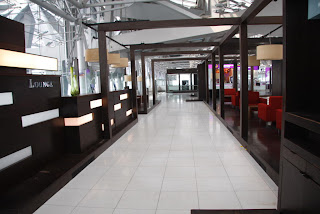 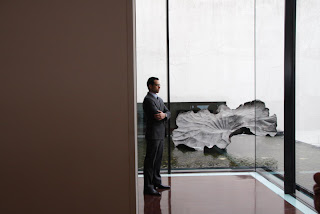 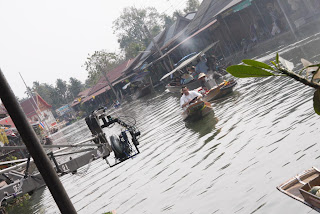 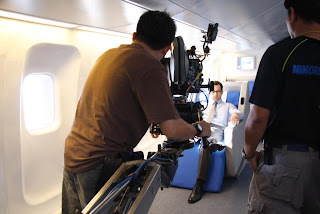 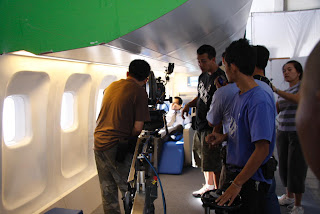 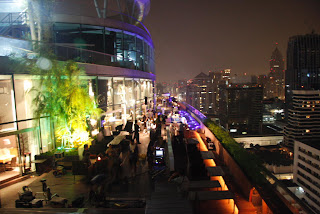 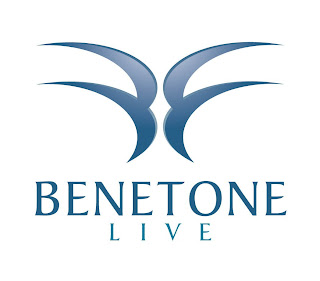 We are very excited to tell you about Benetone Live, a new division of the Benetone Group that plans and manages artistic performances, live entertainment, and social events in Bangkok. They have already put on some fantastic events, bringing in top notch international and local talent, and have some really exciting plans in the works for upcoming projects.
Benetone Live specializes in conceptualizing, co-ordinating and promoting customized MICE and live events and we're going to keep you up to date with the newest ones as they come along. See their new-ish Facebook page and become a fan to get a look at behind the scenes pictures and news from past happenings.
And don't forget to stay tuned to this blog for first looks and exclusive opportunities to join upcoming Benetone Live events!
No comments:

Just up is our new TVC for Standard Chartered Bank Pakistan (SCB) & the Pakistan International (PIA) affinity card. This one is a stellar showcase of some of the diverse settings available for shooting films and TV commercials in Bangkok.
Being that the product is related to tourism, they decided to shoot here as Thailand is a key tourist market. Take note of the traditional floating market and beautiful night sky. A big draw for this shoot was also the fantastic art team which did a great job with the business class seat mock up.